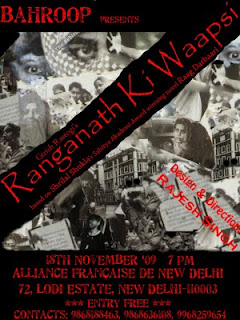 Based on the famous novel ‘Raag Darbaari’ by Shrilal Shukla, Ranganath Ki Waapsi is an intellectual kaleidoscope viewing and reviewing the world in our proximity. It deliberately dodges cynicism despite an in-depth scrutiny of fundamentalism, racial and class profiling, parochialism, chauvinism and political apathy amidst all other menaces of a forced urbanization of an indigenous setting.

The play highlights the failing values present in post-Independence Indian society. It exposes the helplessness of intellectuals in the face of a strong and corrupt nexus between criminals, businessmen, police and politicians through a suave and hilarious satire.

The novel is narrated from the point of view of Ranganath, a research student in history, who comes to live with his uncle, Vaidyaji, in a village named Shivpal Ganj for a few months. He learns how his uncle uses all the village institutions -- the village school, the village panchayat (a local elected body), the local government offices, etc. -- for his political purpose. The conduct of his uncle and the petty village politicians is in stark contrast to the ideals that Ranganath has learnt to aspire to during his university education.The villagers take pride in calling themselves 'gunjahe', originating from 'ganj' of 'Shivpal ganj'

This ‘Shivpal ganj’ is the microcosm, as a mirror reflecting the macrocosm -the whole of India and the world. 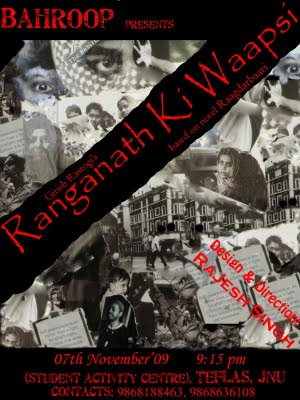 (based on novel Raag Darbaari)