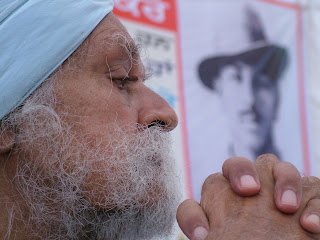 Revolutionary playwright, director, and activist, Gursharan Singh passed away in his home in Chandigarh on September 27, 2011.
Gursharan Singh, who became popularly known as “Gursharan Bhaji, and “Bhai Manna Singh,” after a character he created, was born in Multan in 1929. He was trained as an engineer and was employed by the government till his arrest and dismissal in 1975 for his protest against Indira Gandhi’s suspension of the constitution and imposition of Emergency.
Though he was released from prison and reinstated in his job after the fall of the Indira Gandhi government in 1977, he resigned his post when he was rearrested in early 1980s and devoted himself wholly to theatre.
Gursharan Singh started writing plays in the 1950s and created a lrage body of works, including 13 books,132 short plays and 6 full-length plays. there have been close to 10,000 performances of his plays across the world. the best loved of these are: "Toya," " Baba Bolda Hai," "Dhamak Nagare Di", "Chandni Chowk to Sirhand Tak", "Kursi Morcha ate Hawa Vich Latkde Lok," and "Kamiyanda Wehda." The plays have been collected in six volumes.


Gursharan Singh produced street theatre in the cities, travelled with his plays to the villages of Punjab, and created a genre that has become known as “rural theatre.” Basing himself on the folk idiom of entertainment and didacticism, GursharanSingh used theatre to tell the truth about an oppressive and corrupt social and political system, speaking for those who had no voice, and encouraging the oppressed and deprived to aspire to change their world. He opened more than thirty-five centres in villages and in Chandigarh, where he trained local artists. Gursharan Singh also published progressive literature and distributed Punjabi books all over Punjab.
Gursharan Singh stood up against the dictatorship of Indira Gandhi at the cost of losing his job and being imprisoned. He also courageously continued his performances through the 1980s, when Punjab was in the grip of religious-separatist violence, despite threats against his life. He took his bold championship of the oppressed beyond theatre to become a prominent defender of democratic rights and civil liberties in India. He supported all who struggled against oppression and fought for social justice while remaining above factions.
He received many awards. At the national level he got the Sangeet Natak Award in 1993, the Kalidas Award in 2003, and the Sangeet Natak Academy Ratna Award in 2006. In Punjab he received the State Language Department Award, Bhagat PuranAward for Service to Humanity (2004), and the Lifetime Achievement Award of the Punjab Arts Council (2011). But perhaps the most fitting award for the work of his life was the Revolutionary Commitment Award that he received in Moga in 2006, when more than 10,000 peasants, workers, and students from across Punjab came to honour him.
Gursharan Singh came twice to North America at the invitation of Indian People’s Association in North America (IPANA) and left a profound impression on the South Asian Diaspora. He not only inspired a generation of writers and activists in Punjab, who mourn him today, but many writers and activists in the Diaspora also mourn him as a source of inspiration and a beloved guide.
(Courtesy: http://blog.hrisouthasian.org/) 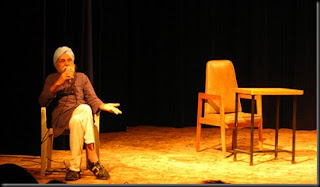 He was an engineer on a hydroelectric project. During dam construction the river Satluj, one of the five rivers of Punjab, India, had to be diverted. So, while standing on a hill, he thought that if the direction of a river can be changed, then why not our society? And this was the turning point in the late 1950s when the five-decade-long journey of Gursharan Singh career in the theater began.
The voice of the octogenarian thespian still thrills the hearts of many and inspires them to raise their voices against an oppressive social system. Gursharan Singh not only acts and crafts the tragic stories of the voiceless ones but also voices the silent cries of the millions of poor, the marginalized of society, the people who for centuries have not been allowed to speak.
Theater for him is a medium to liberate the people from oppression, so he charges only Rs 2000 to 2500 (US$44 to US$54) per performance. So far, he has penned 133 lays, and there have been about 8,500 performances all over the world. His life partner, Kailash Kaur, and two daughters for several years have also accompanied him on his mission. Out of his long journey a new genre of theater has been born, going under the name of “rural theater.”
He raised the voice against the “emergency,” when citizens were deprived of their democratic rights (declared between 1977 and 1980 by then Prime Minister Indira Gandhi), and was dismissed from his position. He was arrested under a trumped-up charge of “training the youth to blow up a bridge.” After going through the charge sheet the magistrate laughed and said to police officials, “it would have been better to implicate him in some theater activity case.”
After the “emergency,” a new government was formed, and Gursharan Singh was released with other political prisoners and reinstated. But once again in the early 1980s, police came to arrest him. He then resigned his job and became a full-time theater activist, which made him the most celebrated face and voice of the deprived people of Punjab. Even the threats of Sikh fundamentalists (in violence that took the life of more than 20,000 people) could not halt his journey.
Some “critics” have termed his theater “an artless slogan.” But always ready with a fitting reply, and, contrary to the theory of “art for art’s sake,” he used art as a mean for the betterment of society. His theater group produced some world classics by Bertolt Brecht and Samuel Beckett, and he himself penned some of the most memorable dramas written in the Punjabi language. But he declared that “elite theater” is not suitable for the poor masses of India, and that the need of the time was to develop theater paying heed to the limitations of rural society.
“I chose theater as a medium to voice my concerns and have succeeded in, for example, challenging the practice of requiring only one’s father’s name in applying to schools. After a long struggle the state government now requires one’s mother’s name too on all official forms. The universities followed suit. Even today in India a pregnant woman covers her stomach as if ashamed, while in the West a pregnant woman gets the utmost respect. We still have to get that respect for our women,” his bright blue eyes beaming.
Among hundreds of other honors, in 1993 he also received the country’s highest award for artists ? the Theater and Music Academy Award. This January he was honored with the Revolutionary Commitment Award in a sleepy village in Punjab. While presenting him with the souvenir, braving the chilly winds, more than 20,000 laborers, peasants, students, and intellectuals echoed together “Long live Gursharan Singh.” Addressing the heartwarming reception, he said with wet eyes, “this award is close to my heart as it comes from my own intimacy with the very people I have interacted with throughout my life.”
As people watch the suffering of the oppressed in Gursharan Singh’s theater, they sob silently and their eyes fill with tears. Such is the power of his work. He voices people’s innermost feelings that they, out of fear, do not express. He moves them to take the road they fear to tread. This is precisely why he has inspired thousands of youth during his long journey.
If some time in the future the history of cultural activism in India were to be written, this brave soldier of the people would be regarded as of epochal importance.
On the query as to whether he is satisfied with what he has done in his life, after a long pause he simply says, “I have still a lot of work to do.” 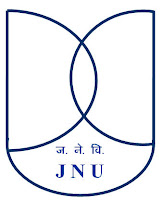 
invites you all to
With Special Focus on
Reflex-Physical Movements
(Kalaripayattu, Tai-chi and Yoga)
from
26th July 2011(TUESday)
6 pm @ Teflas TV Hall, JNU
Posted by Benil Biswas- Vidushak (The Jester) at 19:07 0 comments 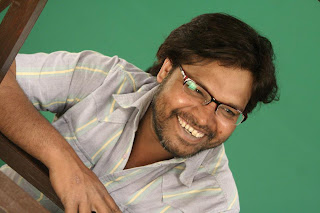 Mohd. Waseem Azad - our friend and guide on the boulevard of theatre activism is no more with us.
Bahroop salutes his spirit and passion for theatre.
we requests you all to come, share the memories of him and pay tribute to this multi faceted personality on 20th July 2011 at Teflas TV hall, JNU, New Delhi at 6:00 pm.
Posted by Benil Biswas- Vidushak (The Jester) at 22:29 0 comments 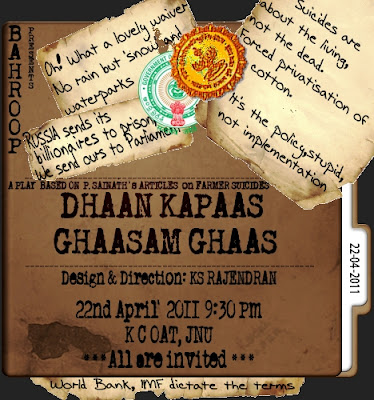 Bahroop
invites you all
to the GBM of the group,
to discuss its activities in the year 2010-2011
and the further course of action.
on
3rd April 2011
Teflas TV hall JNU, 4 pm
Posted by Benil Biswas- Vidushak (The Jester) at 08:41 0 comments