Condolence meet in the memory of Vijay Tendulkar 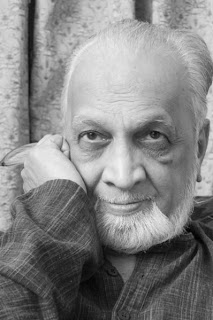 Vijay Tendulkar (Marathi:विजय तेंडुलकर)(January 6, 1928 - May 19, 2008) was a leading Indian playwright, movie and television writer, literary essayist, political journalist, and social commentator primarily in Marāthi. He is best known for his plays, Shāntatā! Court Chālu Āhe (1967), Ghāshirām Kotwāl (1972), and Sakhārām Binder (1972).Many of Tendulkar's plays derived inspiration from real-life incidents or social upheavals, which provides clear light on harsh realities. He even provided his guidance to students studying “Playwright writing” in US universities. For over five decades, Tendulkar had been a highly influential dramatist and theater personality in Mahārāshtra.

Bahroop shared the grief of all theatre-lovers over the sudden demise of
Vijay Tendulkar, the doyen of modern Indian theatre.
A condolence meeting was held at 6:30 pm on May 20, 2008(Tuesday) at Teflas TV Hall, Jawaharlal Nehru University. We read scenes from his plays Sakharam Binder and Gashiram Kotwal.

Shahid Anwar told us that the best way to pay condolence to a playwright is by celebrating his thoughts, his ideas and his plays, not just getting in remorse about his/her demise. So, we lived his spirit.

We also read Vijay Tendulkar's Interview with Jaidev Taneja (well known theatre critic and Bahroop's President), where Tendulkar, himself judiciously answered the critiques, that were posed against him and his plays.( Reference: Rang Saksatkar, by Jaidev Taneja, Kitabghar Prakashan)

It was an evening of high esteem, as Vijay Tendulkar was one of those few indian thinkers, who could intervene, and show us the follies right in our face. we pay our homage to him.